The Design of Small Model Railways

Many modellers who want to build a small model railway are inspired by plans manufacturers publish, for example in their model railway magazines↗. There is usually little wrong with these types of plans. It just strikes me that they usually have the same theme. On the European mainland, and especially in Germany, there is a long tradition of imitating the landscape in the low mountain range: the rolling hills of central Germany. A small station and a village is placed between the hills. The track shape is an oval and sometimes a folded figure eight. There's room for a short passenger train, some goods services and that‘s it.

And honestly, for me it‘s a little nostalgic to see these jobs. Especially the way they were built in the 60s or 70s. A kind of fairytale landscape with cute houses (not to scale), a church, a stream and of course hills with tunnels. A castle in the background adds to the romance of the scene. When executed correctly, they are absolute gems. So let‘s see if this type of landscape is suitable for small model railways.

I wanted to see if these old plans can still be used for designing a small model railway. And for that purpose, I used Plan 1 from the brochure Track Layout Plans 840 from Faller↗. You can still buy this brochure second-hand on the internet. This plan is the first plan in the brochure, and I always found this plan cute in its simplicity.

↓ This is a page from the brochure showing what Faller decided this layout would look like. Notice the different variations of the plan with different road layouts for the AMS slot car system. 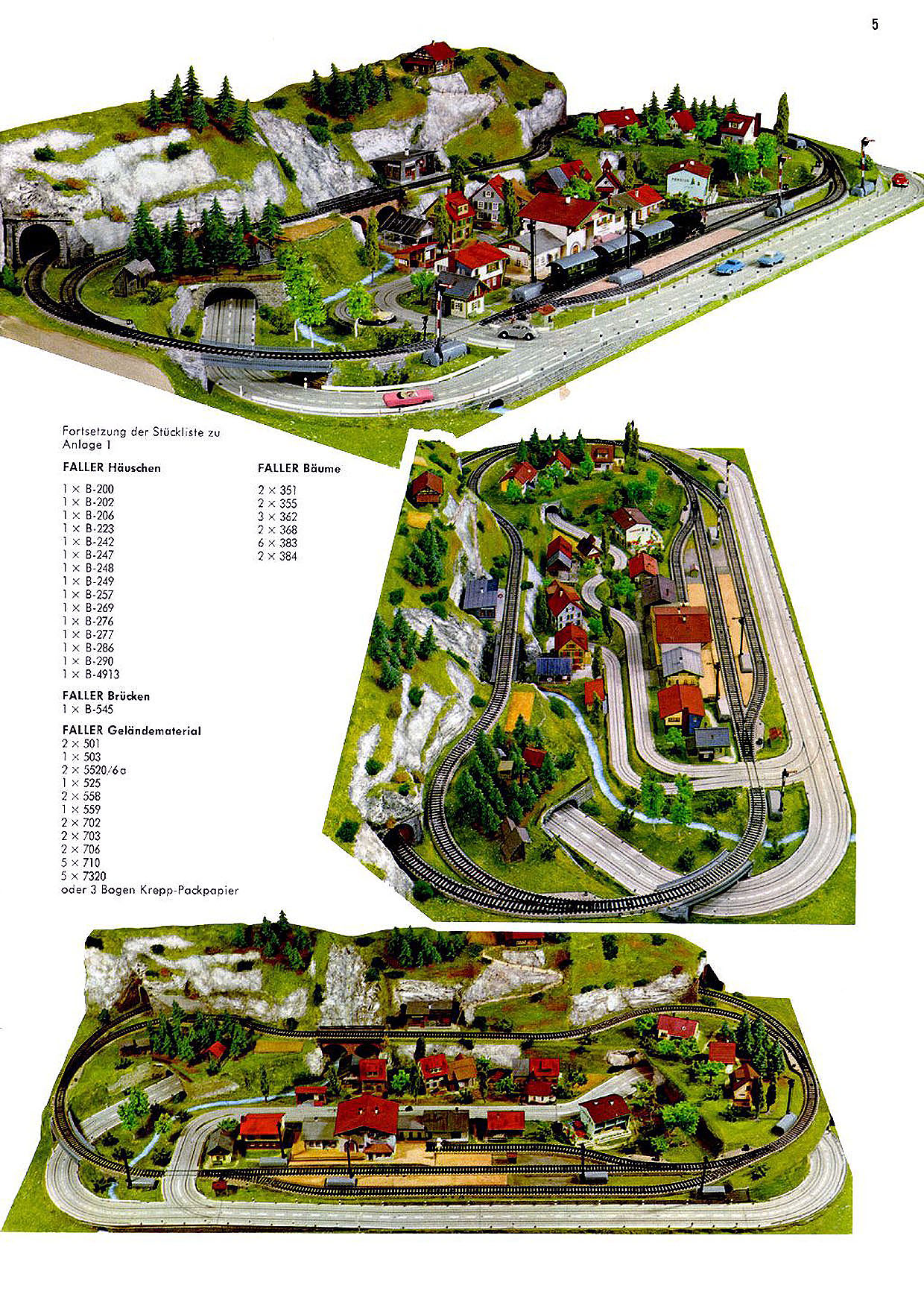 When I started to draw the plan within the Anyrail↗ track planning software, I notice several mistakes in the original designs. I know, when the original plans were drawn computers weren‘t available to help the Faller people, but it‘s kind of sloppy. Don‘t expect all older plans to be exact in their measurements.

↓ This is the design I ended up with. Some modifications were made, and I had to study the photos to analyse how the layout was built. Anyhow, the AMS slot car system should also fit together, but I don‘t think many modellers want to rebuild that part. Using the more modern Faller Car System to create the same road plan would be fun too.

When I‘d finished the plan, I realised why this plan fits a 1×2 m² baseboard. It‘s used the Märklin↗ M-track 5120 curved tracks quite extensively. Article number 5120 is a 45° 286 mm radius curve. Nowadays you should be careful to use these sharp curves. Even short cars can have problems navigating these curves. So when I tried to redesign the plan using the current, more modern Märklin C-track system. Because this system has a minimum radius of 360 mm, and only turnouts with larger radii, the plan grows in depth.

↓ This plan is my direct translation of the original plan. There‘s no room anymore for the rood in front of the layout. And that‘s a pity because it is part of the charm of the original layout. Of course, you can increase the depth of the layout to accommodate a road. As I said before, wouldn‘t it be fun to use the Faller Car System here?

When I reviewed this plan, I didn‘t like its operational value much. The track lengths in the station are short. So, I used some curved turnouts and voilà, and the platform lengths increase. They can now accommodate extra cars. You can see this plan at the top of this page. It‘s kind of a maxed-out version of the original plan. But somehow it also lost a lot of its charms. The design becomes pretty straightforward. Quite plain indeed. I hope we can do better.

After all this redesigning, where do we end? I know some people love these old plans because they‘re so nostalgic. But in the end, you end up with something not very outspoken. A through station with two platforms and one or two sidings. Is that enough to be of operational value in the long run? You can run a short passenger train and a goods train. But the play value is rather limited. I admit, in some of my other plans, the play value is also not very high. And that has all to do with the size of the plans themselves. It is up to you to decide how much operational value you want.

But model railways in the United Kingdom are always about operating and shunting trains. Perhaps that‘s why their predilection for the terminus station. And when space is tight, the British prefer tracks over landscape when designing small track plans. More about this in the next design.

↓ Below you can find the list with track pieces required.